Feature changes and new features in 6.9.0

This release adds a new usability feature to Adapt It that will be of interest to all users of Adapt It. 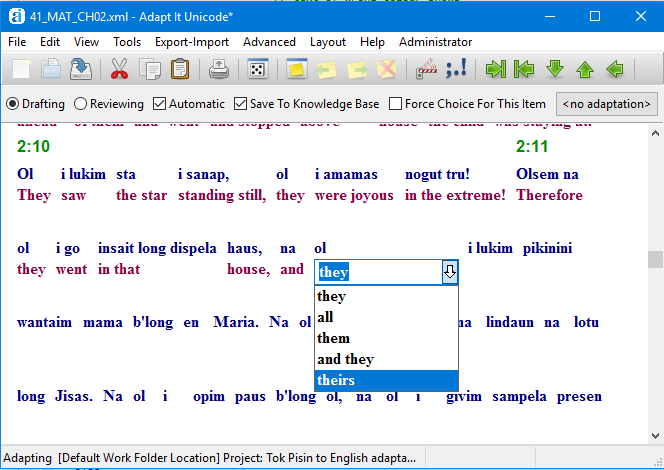 Here is a screen shot of how the new feature appears when the phrasebox lands at a location that does not yet have any translations and the source text is just copied into the phrasebox and selected (notice the phrasebox simply has a rose pink X instead of a drop down button): 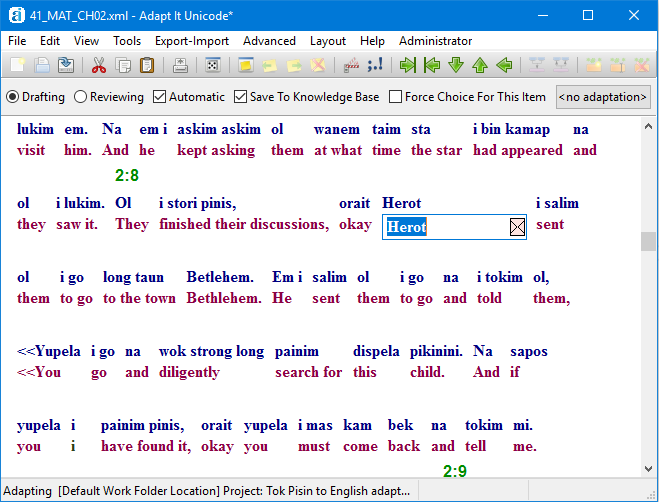 * Changed Join Documents. Since 2014, it could show the list within the Join Dialog being partially empty, or totally empty. Now, if every adapted document contains a book ID (e.g. MAT, or MRK, or LUK etc) then the list will contain just the chapters of the currently open book ID for the chapter 1 document; otherwise, all documents available will be displayed in the list – which gives the user more work to do to get just the ones he or she wants. Compiling the list takes longer, so please wait.

* Modified the Clipboard Adapt feature to stay open until the user chooses to close it by clicking the Close button. This allows multiple small adaptations to be done, without having to open the feature by a menu choice each time some new source text for adapting has been copied to the clipboard.

* Protection added which should prevent Auto-Save from causing loss of the user’s adapting work in a file in rare circumstances. (It was caused by a legitimate document destruction being in progress and the auto-save timer fired to cause a document save – but by then the document no longer existed.) Now, doc save and doc destroy are forced to be sequential. If the save begins first doc destruction is blocked until the save completes; if the auto-save begins first, doc destruction is blocked until it completes – and then the auto-save gets its chance, and the app checks for the doc still being in existence – and if it is not, the auto-save is skipped. This means the error will never happen again, and it is now safe to have auto-saving turned on in all circumstances.

* Disallowing “Edit Source Text” feature when the Clipboard Adapt feature is in use.

* Some extra collection of information for the User Log, to help the developers to find out what might be causing a failure.

* When the source text has no upper case/lower case distinction, but the target text does have that (e.g. Arabic script to Cyrillic script), the Auto-capitalize feature did not work. In recent versions we provided a project configuration file line called: SentenceFinalPunctuationTriggeringCapitalization where the user could manually type sentence final punctuation characters which should trigger automatic capitalization of the first word of the next sentence – such as ”’.>!? That was introduced in version 6.8.0. We did not, however, provide a way for the user to add the needed punctuation via the Adapt It user interface. This meant the help we provided became forgotten over time. Now a text box has been added in Preferences to allow typing the punctuation there.

* Fixed an export bug in which the export would be truncated, or partly lost, if the \x* of a cross-reference which is to be filtered, was absent.

* Fixed a bug in collaboration which would declare that the last chapter of a book has no content, when in fact it has.

* Fixed a collaboration bug when the user makes single-word retranslations; the target text of these was being wrongly removed from the data being merged in from Paratext’s source text within the collaboration.

* Fixed a bug which can appear when Paratext 8 projects have a complex Language identifier field that is made up of more than one code separated by colon characters. Adapt It was parsing the codes wrongly which caused Adapt It to not be able to recognize the Paratext projects after they were set up for collaboration within Adapt It.

* Fixed a bug that appeared in version 6.8.3 that would could cause a crash when accessing the Administrator menu after changing to a French or other non-English interface.

See the “Help_for_Administrators.htm” document for more details and how a collaboration scenario might play out, using this data transfer protections feature.

Windows and Macintosh version downloads are available at:

Linux version 6.9.0 Debian packages are available in i386 and amd64 architectures for Ubuntu Trusty, Xenial, Artful and Bionic. There are instructions on how to configure your Linux system to gain access to the SIL repository at:

Basically you need to download and install the repository’s public key on your machine, and then set up your Software Sources with one of the following settings depending on your Linux distribution:

The Ubuntu Artful distribution only has short term support from Canonical. The Trusty, Xenial, and Bionic distributions are long term service (LTS) distributions which Canonical will support with bug and security fixes for 5 years from their initial release.

If you are using Wasta Linux the software sources for installing and updating Linux software from the packages.sil.org/ubuntu repository are already configured.

Adapt It WX is the open source, cross-platform version of Adapt It that is based on the wxWidgets framework (hence the WX in the name).

Alternately, you can send an email to one or more of the following team members via their individual email addresses: